Three years ago today I had an adventure, and I wrote most of this post. Some of it reflects that time, and I’ve left those references. Other parts have been updated.

One of my ongoing projects is to visit all of the large springs of the Ozarks as listed in Wikipedia. There are twenty springs on the list—here’s a map: 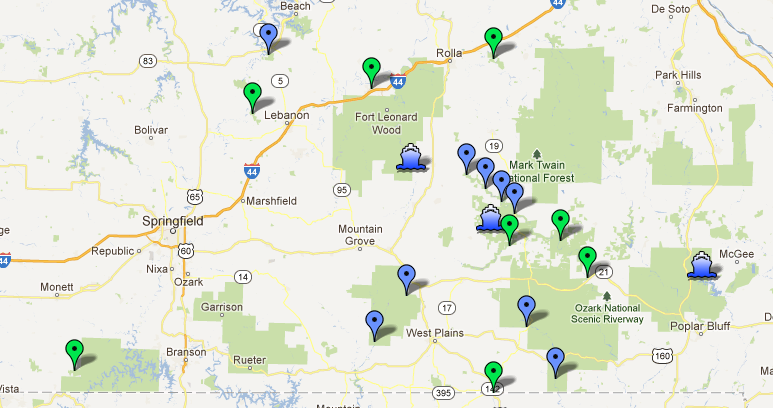 Large springs of the Ozarks

(Since 2013, I’ve visited more springs, and the project includes more than the Wikipedia list. You can see the map with the full list here and my Flickr album here).

Every time I visit home (Springfield, Missouri) I make a point of visiting one or two more springs. On one recent visit, the plan was to stop at Blue Spring on the way down there. One must be deliberate when setting up the navigation to go to Blue Spring, for there are at least three places known as Blue Spring. One is in Florida, and two are in Missouri. My destination was the Blue Spring near Eminence, Missouri.

I hadn’t factored in sunset when planning the trip, and at one point GPS told me to turn down an unmarked gravel county road, and that seemed like a bad idea, so I didn’t. That decision added twenty or so miles to the trip through the backwoods of Missouri. So by the time I finished joyriding* through Mark Twain National Forest it was near dark. Near as I was, I pressed on. The sign for Blue Spring Trailhead came up on my left, and after a two-and-a-half mile drive down a gravel road, I reached the parking lot. It wasn’t so dark that I couldn’t see the sign that said it was 0.4 miles to the spring, and really, by then, I wasn’t about to turn back. 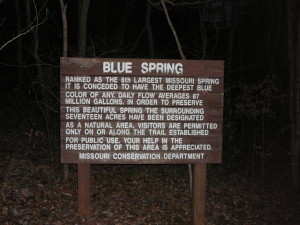 You’ll note that this sign indicates that Blue Spring is the 8th largest Missouri spring. Understand that the Wikipedia list includes Mammoth Spring, which is right over the border in Arkansas. That makes Blue Spring the sixth largest Missouri spring on the Wikipedia list, and if the Wikipedia article is to be believed, some of those springs have had fewer than ten measurements of their average daily flow, so it’s natural for the list to be rejiggered as better figures come out.

Even as I took the picture of the sign, the darkness grew darker. To my right the Current River flowed; across the way I could see the white of a gravel bar. As I drew near the spring, the temperature dropped.

Finally I reached the spring, and in the dark it looked a lot like this: 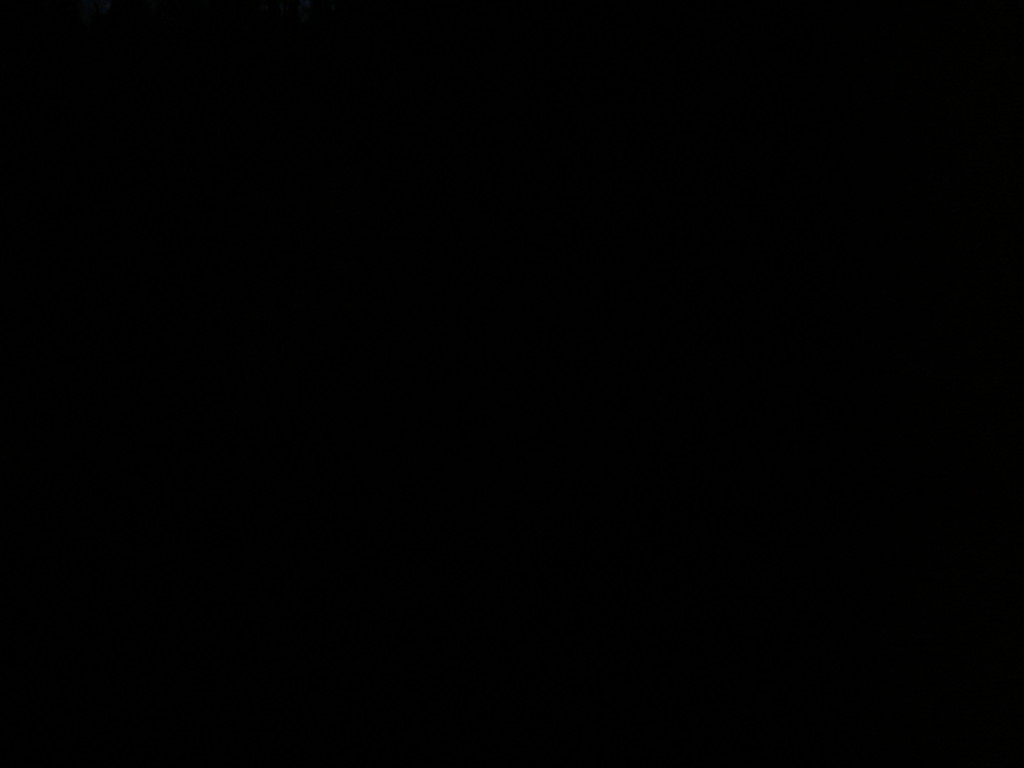 Blue Spring in the dark

So I set my camera on a rock, pointed it at the bluff over the spring, set it to a 60-second Starry Night exposure and wandered off while the camera did its thing that actually takes two minutes. And this is what I got: 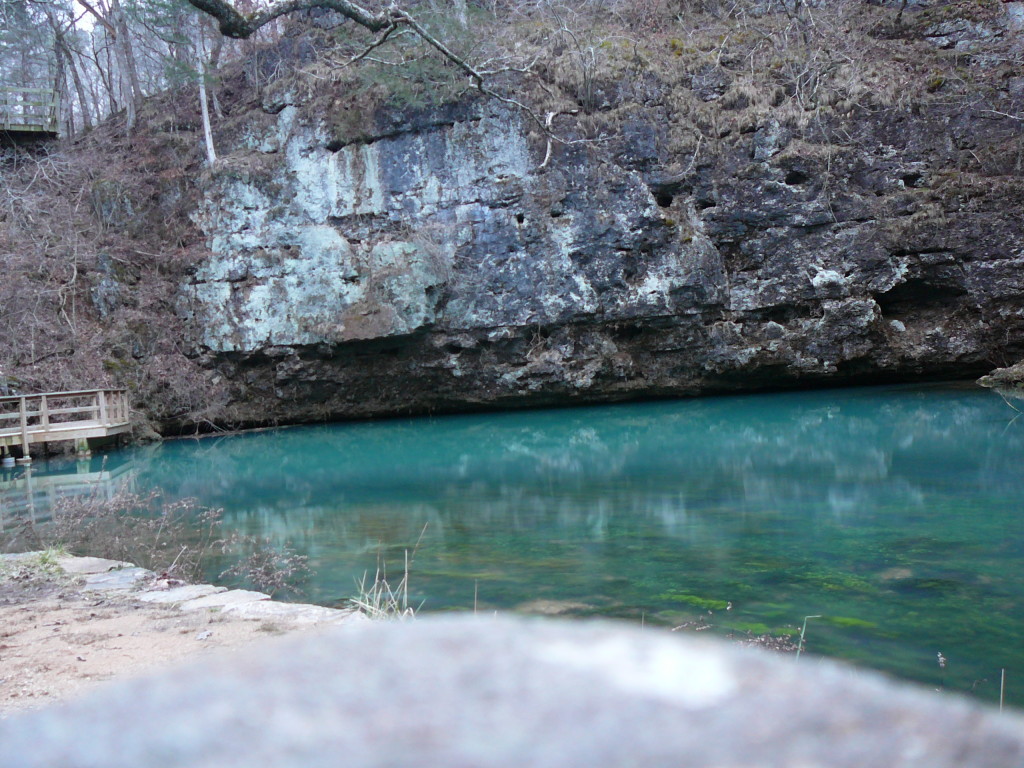 Blue Spring as the camera can see it in the dark

At the time, all I was worried about was the darkness, and the isolated location, and if I was ever going to see Bigfoot** now was the time, and who else was in these woods.

So there really wasn’t time, or light, to enjoy the Blue Spring experience. But there was always the return trip.

On the return trip, I stopped first at Alley Spring, the site of the eighth largest Ozark spring. It’s just a few miles down the road from Blue Spring. 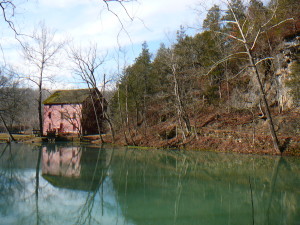 You should know that the on the first trip to Blue Spring the turnoff to the spring came several miles before I was expecting it, but out there in the middle of Missouri nowhere I assumed that GPS was off a bit. So I wasn’t thoroughly surprised when today’s suggested route took me a slightly different way—I thought that maybe the road I was on would hook up with the one that I wanted to be on. And so I went, all the way to the end of County Road 533, where I found this: 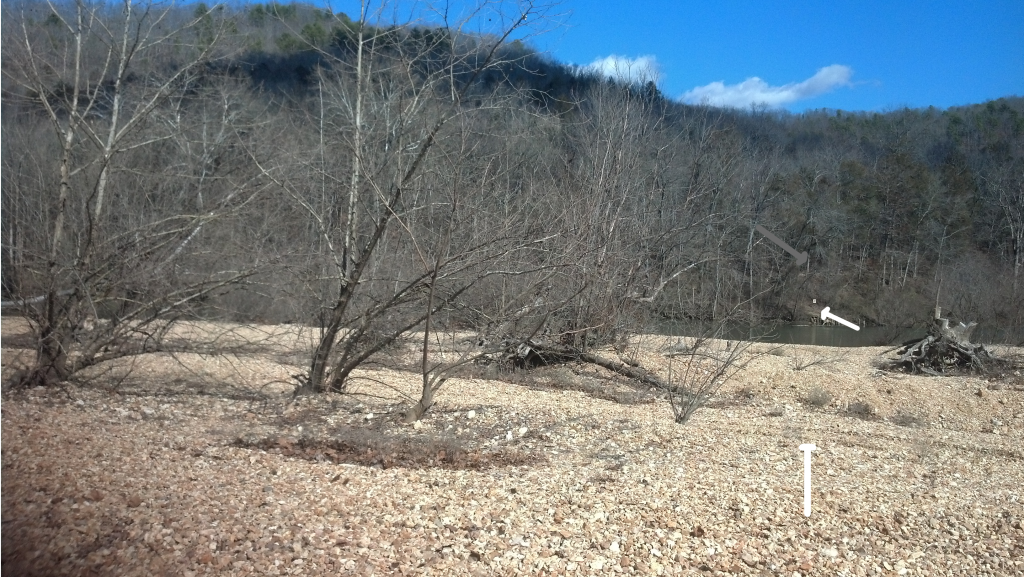 Yes indeedy, that’s the gravel bar. The one on the other side of the river from Blue Spring. That tiny white sign you see on the right? I don’t know what it says, but it’s at a canoe landing just below the Blue Spring Trail, which you can see faintly below the gray arrow.

It’s what that bottom arrow points to that should catch your attention. Those are tire tracks, evidence that those before me have driven onto the gravel bar and presumably lived to tell the tale. I sat poised for a moment on the edge of the road and the edge of the gravel bar and for half a second considered not driving further, because it didn’t seem like such a good idea in a Honda Accord.

It was an idea that deserved at least another half second of thought, but my foot was already on the pedal. Almost immediately the car got stuck in the loose gravel, but I managed to rock it out of that spot, and then, on the way out, got stuck again. Good and stuck and never coming out if it was up to me. I got out to survey the situation. 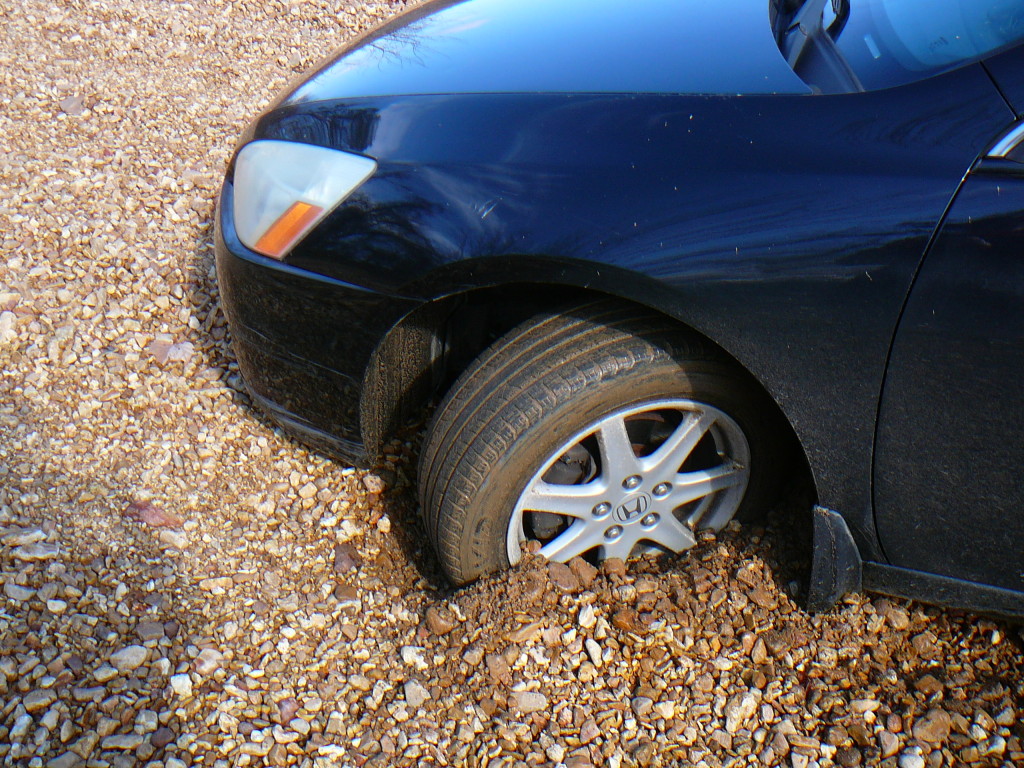 What to do? I decided to call my husband; with photos and words we might be able to sort this out together. But as you may remember, I was in the middle of nowhere Missouri and there was no reception.

Further thought led me to wonder: What would Dawn do? My friend Dawn and I went backpacking on Isle Royale last summer and among other things she built a last-minute twig stove out of a coffee can with nothing but her bare hands***. When things go wrong, Dawn is a good person to have around. And even though she would never have driven her car onto a gravel bar, she would know what to do in a situation like this.

It was soon obvious that there was nothing to do but walk until I met someone or until I could get a phone signal. When I got one, I called roadside assistance and arranged for a tow truck. Then I started Facebooking.

Cars really were going by: what we later learned was a National Park Service vehicle; a truck no one had ever seen before; and another truck driven by a retired lead miner (RLM) out looking for bottles and cans. I was behind a giant tree root when the first two went by. By the time the RLM came back the other direction, I was waiting by the side of the road for the tow truck with nothing to do but answer Facebook comments and make up self-deprecating jokes to defuse potential tow truck driver jokes about people who get their vehicles stuck in a gravel bar.

From the lead miner, I learned that there used to be a ferry down the way from this side of the river to the other, where Blue Spring was located, but it had been discontinued long ago. He was in the middle of telling me about how local landowners reacted to the creation of the Ozark National Scenic Riverways when the tow truck arrived.

It turns out that I was not the first person to get a vehicle stuck on this gravel bar; not a group I’m proud to be a member of.

So we get to my car, and while the tow truck driver is hooking up a cable to my car, my phone rang.

The phone that couldn’t get a signal. The signal I walked an hour to get.

It was my father, calling to find out if I was all right. He’d heard from a friend of mine that there was trouble.

It wasn’t a good signal, so I assured him I was fine and that I’d call later.

My memory on this next bit is fuzzy—I either got a text or a call from a friend who had called the Shannon County sheriff’s office. Once again, I assured him that all was now well.

And I was. Once the car was hooked up, it was the work of a moment to pull it back up on the road where it belonged, and I was off to the other side of the river, where I took a daylight photo of Blue Spring: 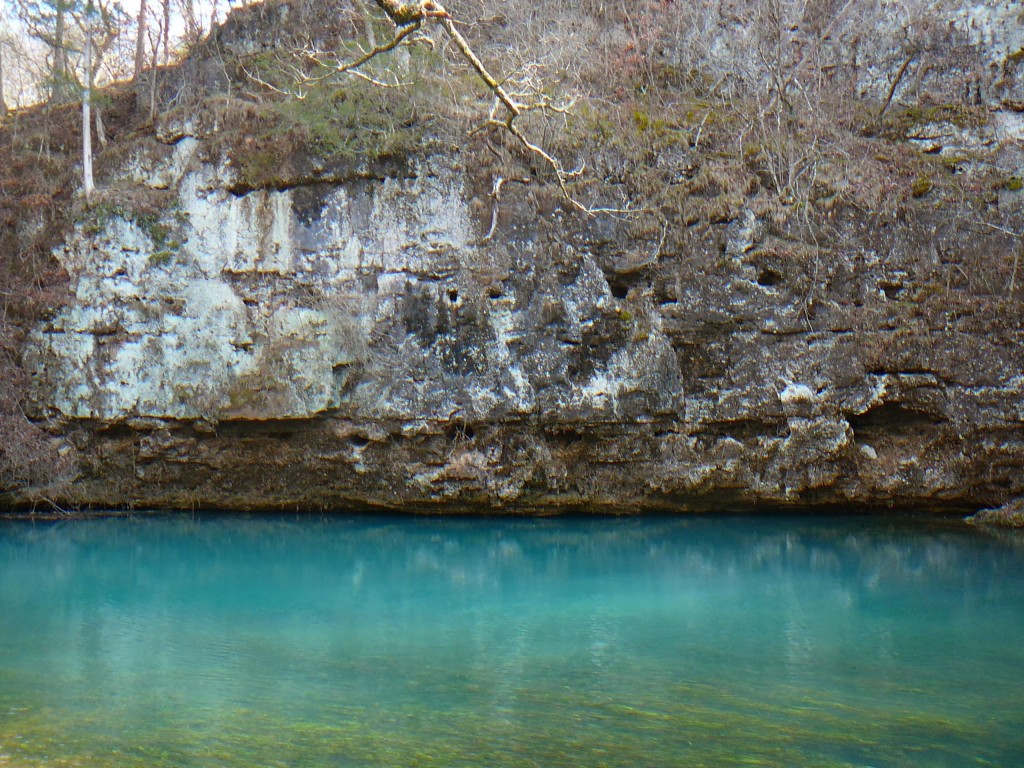 Two days later I contacted Google about their directions, and several days after that I received this:

And that was my Blue Spring adventure.

*$85 worth
**I am not as skeptical about Bigfoot as some would think. You have my permission to discuss this with me.
***And some tools she had in the back of the van.